Maybe it’s because of movies I’ve seen, or possibly because of my interest in history, or both, but Remembrance Day has always been important to me.

When I was a kid I borrowed the vinyl LP “Billy Bishop Goes To War” from the local public library. More than once.
This masterpiece of Canadian theatre has everything that a good war story ought to have. Humour. Drama. A valient hero. Politics. And tragedy. Later I bought my own copy, which I played for my child on Remembrance Day.

One of the most haunting songs I’ve ever heard is Chris DeBurgh’s “This Song For You.”

And the best war movies I’ve seen were William Wyler’s The Best Years of Our Lives, Hal Ashby’s Coming Home , and, best of all, Peter Weir’s Gallipoli

All are powerful works of art, each carrying the clear message that wars should be avoided.

On past Remembrance Days I’ve written about copyright in The Eleventh Minute, the Eleventh Hour, the Eleventh Day and the tragic monument at the University of Toronto: In Flanders Fields….

Sadly, the wrongs that I wrote about have not yet been righted. Earlier this week my friend Satipera shared this powerful article from the UK which looks closely at the wearing of the poppy Robert Fisk: Do those who flaunt the poppy on their lapels know that they mock the war dead?

I very much doubt that a single Canadian politician anywhere in the world will be without a poppy today. Yet who, more than they, hold the responsibility for the continued sacrifice of a new crop of young Canadians soldiers engaged in a war because … ?

“Since 2001, 158 Canadians have died in Afghanistan and another 6,700 are collecting disability payments from Veterans Affairs, about 130 of them under the age of 25. ” 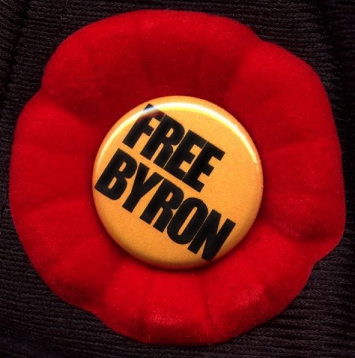 Canada has been involved in an almost invisible war for nearly a decade. It is barely spoken of, but young Canadians fight and die and I can’t tell you why. I suspect they can’t, either. Unlike the glamorous Great War, or the Second World War, the only citizens who are really involved and affected are the Canadians whose children are overseas, fighting and dying. Has a decade of this fixed anything? Has anything good come of this war? A war that Canada is supposed to be withdrawing from by the end of this year. Will we really withdraw?

I can’t begin to count the times in my life that I’ve heard it said that our soldiers fought for our freedom. But there is much less freedom now than there was when I was young.

The erosion of civil rights that the blood of our soldiers was to have bought for us was never more clear than in the events around last year’s G20 Summit in Toronto.

Today, Canadians across the country are organizing and participating in the “Occupy” movement.

And Byron Sonne is on trial in Toronto.  He’s fighting for his freedom, and ours.

Where did our freedom go?

“Airfield to Salute” photograph by U.S. Navy Petty Officer 2nd Class Aramis X. Ramirez
Wikipedia: KANDAHAR, Afghanistan–Troops deployed to International Security Assistance Force (ISAF) Regional Command South gathered on the flightline of Kandahar Air Field to salute fallen Canadian servicemember Sapper Sean David Greenfield on February 1, 2009. Greenfield, who was deployed as part of the 24 Field Engineers Squadron out of Petawawa, Ontario, was killed in action in the Zhari District of Kandahar Province on Jan. 31, 2009 ISAF photo by U.S. Navy Petty Officer 2nd Class Aramis X. Ramirez (RELEASED). ~ This file is a work of a sailor or employee of the U.S. Navy, taken or made during the course of the person’s official duties. As a work of the U.S. federal government, the image is in the public domain.