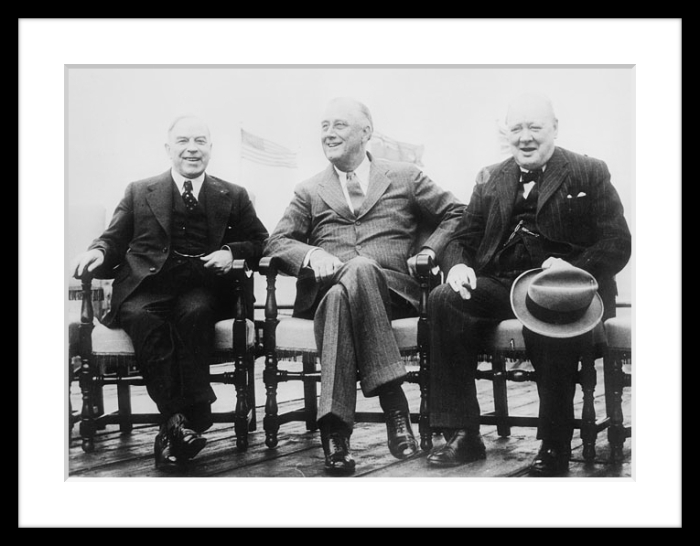 For those who don’t know, at the end of Second World War the victorious Allies governments imposed Mixed Member Proportional Representation on West Germany.

They did this specifically to prevent the rise of another Hitler.   Although these powerful government leaders clearly understood this, they chose not to follow the same path for their own nations. Presumably they believed such limitation on their own power wasn’t necessary.   Just as Canada’s current Prime Minister doesn’t feel his power needs limitation.

Had Harry Truman implemented such a change on the USA, the likelihood of a Trump presidency would be nil.

Had Prime Minister William Lyon MacKenzie King implemented some form of Proportional Representation in Canada, Canadians would not see be seeing a rise in dog whistle politics. My brother wrote about this phenomenon before either of us knew the term.

Winston Churchill knew Proportional Representation was a defence against fascism.

Here’s the thing: fear and dog whistle politics are a powerful tools used over and over again in winner-take-all systems because they work.  One of the things so dreadfully wrong with winner-take-all politics is that the governments we elect are so unaccountable to voters, it isn’t a question of whether they will keep all their promises, it is a question of which promises they will keep.  And, incredibly, we accept that.  We have been conditioned to understand they won’t keep all their promises.  No doubt this is a major reason the young and the idealistic don’t engage in politics: they see it for a sham, and choose to invest their energies elsewhere.

The Canadian MSM is now reminding us that all the MPs in Parliament — including those Conservative Leadership Candidates seeking to ride a wave of prejudice to 100% power in Parliament — voted in support of Mr. Mulcair’s October Petition.  This was long before 6 Quebec Muslims were murdered at prayer.

Mr. Speaker, following discussions with all parties in the House, I hope you will find consent for the following motion. I move:

That the House join the 69,742 Canadian supporters of House of Commons e-petition (e-411) in condemning all forms of Islamophobia.

So what has happened?  Do these Conservative Leadership Candidates feel a majority of their constituents approve of gunning down Muslims at prayer?

I don’t believe that for a minute.

But our winner-take-all political system allows for the distribution of a disproportional amount of power.

In a winner-take-all system like ours, Ms. Leitch doesn’t need a majority of Conservative Party Members to support Islamaphobia in order to win her party’s leadership crown.  Nor does she even need to attract a majority of voters to become the Prime Minister of Canada.

So long as we continue to use this First Past the Post Electoral System, the right dog whistle can win a 39% (or less) majority.

It doesn’t matter if we have a few women or minority MPs in the House of Commons.

We are staring in the face of the polarization inherent in FPTP.  This whole hullaballoo starkly contrasts what happens when a powerful old white male MP puts forward a Motion condemning Islamaphobia with what happens when a young ethnic woman MP does.

And it is a not pretty picture.

But it happens. And it will keep on happening so long as we retain an electoral system that rewards dog whistle politicians with more than their fair share of power.

It does not have to be this way.  In spite of his totally specious arguments to the contrary, Prime Minister Trudeau’s disavowal of his electoral reform promise not only paves the way for institutional racism, it fuels Islamaphobia.  If Ms. Khalid (and other Liberal MPs) want to change this dreadful FPTP side effect, it is time they told their leader he must restore the Electoral Reform process and show leadership to get Proportional Representation legislation through Parliament by October.

Because if Canada wants to be a healthy multicultural democracy, we must have Proportional Representation.

At this time of writing, Petition e-616 is up to 120,651 signatures. If everyone who has already signed it can convince 2 Canadians to sign it our chance of having Proportional Representation implemented by 2019 will be greatly improved.