This is the twelfth in the Whoa!Canada: Proportional Representation Series

Getting up to speed on electoral reform can be difficult, so I’d like to share Fair Vote Waterloo’s timely and informative video, Proportional Representation vs. Alternative Vote.

In the hands of anyone else, this discussion might have not have been suitable for a general audience, but these professors kept it clear and were careful to explain things that might have become too technical.

The question and answer session at the end of the talk was equally informative.

When I was just starting to learn about electoral reform back in 2012, I heard Dennis Pilon speak at a Fair Vote Waterloo event at Wilfred Laurier University’s Lyle S. Hallman Faculty of Social Work in Kitchener.  Hearing Mr. Pilon again this year,  I was reminded that electoral reform isn’t really as complicated as defenders of the status quo would have us believe.  It’s really only confusing because we are unfamiliar with the alternatives.

Mr. Pilon also explains that different voting systems (including multi-member ridings, Proportional Representation and Alternative Vote) have indeed been employed in parts of Canada throughout our history.

No matter which electoral system we choose, the mechanics of voting for will not change dramatically for voters.  We’ll still go to the polling station, get our ballot, then go behind a privacy screen to mark our choice.

Defenders of the Status Quo often tell us that Canadians understand the system we have now because it is easy.  They say adopting any new system would be more difficult for Canadians than what we have now.  And yet the reality is that we don’t actually understand it.

Many Canadians think when we vote, we’re voting for the Prime Minister.
The reality is that we don’t have presidential elections like our American friends.  We don’t have a say in who the leader will be because we don’t hold Primaries.  In Canada, the members of political parties choose their own leader. And the only Canadians who can actually vote for the Prime Minister are those who live in the presumptive PM’s riding.  The only Canadians who voted for Prime Minister Justin Trudeau in 2015 live in the Quebec riding of Papineau.

Many think our votes are equal and effective.  But when 38,000 voters can elect a Liberal MP but it takes more than 600,000 voters to send a single Green MP to Ottawa, it is very clear that all our votes are not equal.

An when 39% of the votes result in majority power, 61% of the voting electorate’s votes have not counted.

We don’t understand that our vote is supposed to result in our representation in Ottawa.

Sadly Canadian political parties have more control over Members of Parliament than voters do under our current system.

Many of us believe democracy is about winners and losers.  But it’s not.  It’s about representing us in Parliament. 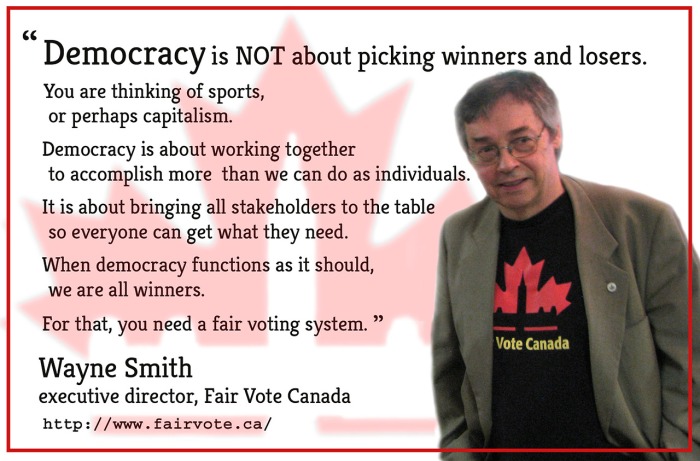 and don’t forget to check out the PR4Canada Resources page!