The Prime Minister, Justin Trudeau, issued the following statement today after hearing of the fatal shooting at the Centre culturel islamique de Québec located in the Ste-Foy neighbourhood of the city of Québec:

“It was with tremendous shock, sadness and anger that I heard of this evening’s tragic and fatal shooting at the Centre culturel islamique de Québec located in the Ste-Foy neighbourhood of the city of Québec.

“We condemn this terrorist attack on Muslims in a centre of worship and refuge.

“On behalf of all Canadians, Sophie and I offer our deepest condolences to the family and friends of all those who have died, and we wish a speedy recovery to those who have been injured.

“While authorities are still investigating and details continue to be confirmed, it is heart-wrenching to see such senseless violence. Diversity is our strength, and religious tolerance is a value that we, as Canadians, hold dear.

“Muslim-Canadians are an important part of our national fabric, and these senseless acts have no place in our communities, cities and country. Canadian law enforcement agencies will protect the rights of all Canadians, and will make every effort to apprehend the perpetrators of this act and all acts of intolerance.

“Tonight, we grieve with the people of Ste-Foy and all Canadians.”

This cowardly attack on Canadian soil has generated outrage across the Canadian political spectrum, with even CPC leadership candidates Kellie Leitch and Jason Kenney speaking out against it.

Tonight there are candlight vigils across Canada.  These are the few I know of:

The Trump Administration has gotten off to a bad start, and almost every step taken seems wrong.
One of the great powers of an American President is the ability to issue Executive Orders. 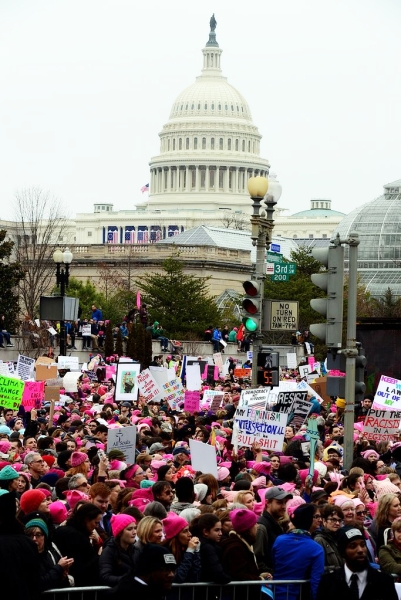 I don’t think Mr. Trump realizes how much his election win benefited from tactical voting.  He’s barely begun and American citizens are pushing back, hard.  The chaos and protests at airports worldwide over the weekend was pretty heavy, prompting Judge Blocks Trump Order on Refugees Amid Chaos and Outcry Worldwide

And Canadians are pushing back, too.  B.C. religious leaders call on Canada to act against U.S. immigration ban.    Even Prime Minister Trudeau tweeted:

But anywhere you have two or more people, you are likely to get two or more opinions. (Which is why Proportional Representation is a necessary part of good democracy.)

Clearly there are people here ~ and there ~ who agree with President Trump’s world view.  And just as clearly there are political agendas feeding fear, Isalamaphobia, whatever.   The controversial anti-niquab attack ad targeting the NDP the Bloc Québécois’ put up during the 2015 election was only taken down today.

As horrible as this tragedy was, I am heartened by the across the board outrage.  But we can’t afford complacency; we need to encourage our Liberal majority government to get on with the necessary work that will make it possible for Canadians to welcome those seeking refuge from persecution, terror and war.   Sign the Leadnow Petition:  Tell Trudeau: Welcome Those Fleeing Violence and Deportation Under Trump

I am struck again and again by the strife engendered by winner-take-all political systems.  When there can be only one winner, everyone needs to win, but most don’t.  And we have seen, over and over again, that the easiest way to become the only winner is to play on fear and build up hatred.  But that is a dangerous game.  It isn’t as easy to turn hatred off.

No where is the us against them polarization more obvious than what we’re seeing south of the border.  And frankly, I don’t think any of us want that.  When Canada finally adopts some form of Proportional Representation, we won’t be an all or nothing world anymore.  Instead of polarization, we’ll be able to work together, to be able to embrace our diversity and tap into our strengths. And then we’ll be able to roll up our sleeves and tackle 21st century problems.

But for now, we’re struggling with the messes of the last century polarization.

In Sainte-Foy, Québec, the victims have all been identified, and the alleged assailants, too.  One man has been charged with 6 counts of 1st-degree murder.  You can follow the link and find out his name if you like, but I’m not about to repeat his name here.   Because here’s the thing… if I ran the zoo, the names of mass murderers would never be said.  Instead they’d be assigned a number and locked away securely for the rest of their days.  Writing the name would just help make him famous.

Instead, I will name the victims here.  I’ll share the names of six innocent men killed by the cancer of hate.  Men who didn’t deserve to die; who deserve to be remembered.